Add Animation Into Powerpoint. While using powerpoint, animation is the best part of powerpoint, with animation on powerpoint you can explain easier all you material with click. You can animate powerpoint so people who show your material get focusing on powerpoint, with this way you will make audience better understanding. For example you will show cycle of process, actually you can just show the picture and you explain the process with oral. But you can do better with give animation to that cycle with powerpoint so audience just watch it and you don't need much to explain. Animation like watching movie, everybody love to watching movie than read a book.

The question is how to add animation into powerpoint? from some people, this is ridiculous question but from the others, it's hard question. Especially with people that don't know much about powerpoint. In my opinion the best way to study powerpoint is trying by your self. You can get course, but you must try it by yourself if you want to master it. I also can use powerpoint by autodidact, studying by myself. And now i will show you how to add animation into powerpoint. 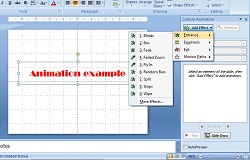