Now, I will complete with another piping design. This powerpoint will explained in middle range about piping design, what we need to be considered when rooting a pipe. Simple answer is operational ability and safety. What mean about operational ability? It’s mean the piping system should be easy enough for person to operate such as valve, instrument and another thing. Anda how about safety on piping design, design piping should avoid injury or potentially hazard for the operator. Like if we not give a insulation in hot pipe, it’s become a hazard to operator that maybe can touch the pipe. And anything else consideration, I explain in this piping design powerpoint. And what we root in piping sistem? What we need? It's also explain on it. 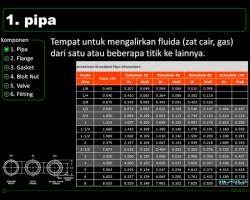 Piping is special, one system and another system will have different rooting. And how to rooting it, we need a PID, piping and instrument diagram. PID is a schematic diagram that explain about process and properties on a pipe, it’s like a whole system of plan we can know from PID. 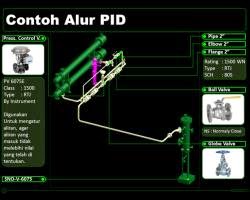 The best part of this piping design powerpoint, is I made it myself. As you know, many of powerpoint that I share in this blog have attractive and nice animation. This powerpoint is one of them. I made it almost a week, in the middle of my work. Yea, the reason take too long making this animation maybe because I doing while work, not rally focus, LOL. But, I sure the animation is good enough to make you inspiration making animation on powerpoint. Ok, lets download below.

But i'm sorry if you from foreign country, I made this powerpoint at Bahasa. So if you from Indonesia, it’s your luck. But if you're not, maybe you can use google translate and make it as your own language. Good luck,

Posted by Drieant on Tuesday, July 29, 2014 - Rating: 4.5
Title : Download Another Piping Design Powerpoint
Description : Piping design, actually I had already share one of my presentation before . That powerpoint explain generally about piping design, with ste...